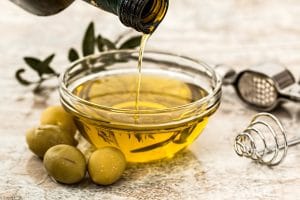 The US FDA recommends consuming 2 tablespoons of olive oil per day. Most already cook with olive oil, but others choose to consume it immediately, even if it may seem eccentric. However, many Mediterranean countries swear by the practice as a health elixir, and lately it seems to be trending in the United States as well, where some celebrities swear that Extra-native olive oil is the key to your health.

Goldie Hawn drinks 2 tablespoons of olive oil before bed and massages it into her face to keep her skin young and healthy. Likewise, Kourtney Kardashian drinks a tablespoon of olive oil every other day, according to her website Poosh, where she touts the health benefits of extra virgin olive oil.

dr. Drew Ramsey, a clinical professor of psychiatry at Columbia University, believes this is the best way to experience the benefits of olive oil. He convinced Carson Daly on the Today Show to drink a glass of extra virgin olive oil while Savannah Guthrie and Hota Kotb looked on. Also, Selena Gomez drinks a small glass of olive oil before going on stage, a tip she learned from Kelly Clarkson.

Writer and producer Shonda Rhimes credits Beyoncé with her new habit of drinking olive oil every day. Beyoncé enjoys drinking extra virgin olive oil, which she even invested in an olive oil company.

What are the advantages of drinking olive oil?