Mediterranean diet with olive oil? Have you ever wondered why Italians, despite their pasta dishes are rather slim? or why spanish or greek people live son long? We asked a group of nutritionists to choose the best diets. Also, experts have long wondered why the incidence of various types of cancer is lower in the Mediterranean countries than in the other countries.

We already know that extra virgin olive oil is the basis of the Mediterranean diet. And we are constantly receiving positive news about its effects on our health. Of course, these facts are not, a priori, related with the health systems of Spain, Italy, Greece or Tunisia. Actually, countries like Germany, France or Sweden have equally effective, if not superior, health systems.

Let’s point out, that for example in Greece, the consumption of EVOO (extra virgin olive oil) is more than 20 liters / year / person, in Italy 15 and in Spain about 12. In comparison, they barely reach half a liter in Germany!

Basis of the Mediterranean diet

What do the southern countries have in common? Nutrition. The basis of the Mediterranean diet are legumes, fish, vegetables and fruits. On the contrary, low consumption of hydrogenated products of animal origin such as sausages or pastries.

It is not yet clear whether the cause is the benefits of Mediterranean foods or the lower consumption of “continental” foods. Unfortunately, habits are also changing in southern European countries, and the consumption of refined carbohydrates, pasta, white rice and animal fats has increased significantly. Fast food, obesity, cholesterol, diabetes and even cancer rates have also increased importantly.

Let’s go back to our grandmothers’ kitchen

It is important that we return to our “spoon cooking”, lentils, sardines, extra virgin olive oil, salads and seasonal fruits. 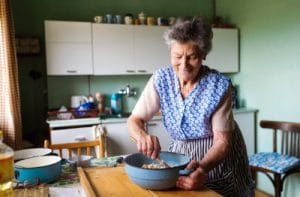 We cannot afford the breathtaking spectacle that countries like the United States or even Australia offer. In these countries, many people over 200kg weight can hardly walk on the street!

The reason is that even if they can hardly move, they are of course great customers!… a real drama.

Actually, it surprises that these countries, with so many resources and drugs to fight cholesterol or diabetes do almost nothing to change the way they eat. And the food and pharmaceutical lobbies seem hardly interested in the actual problem.

The Mediterranean diet for health

Fish, olive oil, vegetables, fruits, all these foods rich in vitamins and minerals. According to many studies these foods fight against cardiovascular diseases and diabetes. And although the Mediterranean diet often includes cheese and meat, they are consumed in moderation.

Huge amounts of olive oil fight cholesterol and inflammation. The Mediterranean diet focuses also on eating omega-3 fatty acids from fish and antioxidant-rich foods that reduce the risk of neurodegenerative diseases in the elderly.

Women who follow in vitro fertilization, thanks to the Mediterranean diet, could improve their chances of success, according to a recent Greek study published in Human Reproduction. In particular, 244 women who had undergone IVF in Athens have been analyzed.

They found that women under 35 years old who followed a Mediterranean diet at least 6 months before IVF had 65% to 68% more chances of succeeding with those who have not adopted this regime.

The message is “to promote the introduction of a healthy diet for women who wish to improve their fertility,” said Nikos Yiannakouris, one of the authors of the study.

And the benefits of the Mediterranean diet were already known by the inhabitants of Greece, Crete or Italy. This diet consists of vegetables, extra virgin olive oil (EVOO), whole grains and dairy products such as yogurt.

Mediterranean diet during pregnancy and children

During pregnancy it is important to pay attention to the diet. A diet rich in vegetables, legumes, dairy products and olive oil would significantly reduce the metabolic risk in the fetus. Until now, only few studies had been devoted to show the virtues of the Mediterranean diet in children’s health.

The study published in the Journal of Pediatrics aim to assess whether the Mediterranean diet during pregnancy influences growth and metabolic risk (blood pressure or cholesterol) in newborns. The researchers studied more than 2700 women from Asturias, Guipúzcoa, Sabadell and Valencia, as well as the weight and height of their children up to 4 years. They also underwent blood tests and blood pressure at 4 years.

The researchers observed that the Mediterranean diet had positive consequences on the development of newborns. Pregnant women who followed this diet were 32% less likely to have overweight children at birth than those who did not follow this diet. At the same time, mothers who did not follow this diet were younger and consumed more calories, compared to women who followed the Mediterranean diet.

These findings support the hypothesis that a healthy diet during pregnancy can have a beneficial effect on the development of the child and show the existence of possible dietary patterns shared between mothers and children and epigenetic modifications that regulate the metabolism of the fetus.

However, the study did not show a direct correlation between the Mediterranean diet during pregnancy and a reduction in metabolic risk during childhood. Anyway, during pregnancy, it is recommended to keep a varied and balanced diet that provides the necessary nutrients for the mother and the baby.

The Mediterranean diet in Japan

It’s one of the healthiest diets in the world. Fish provides omega-3 essential fatty acids that have been shown to reduce the risk of heart attack and cardiovascular disease. In particular, Sushi, the most popular food in Japan, not only provides energy, but also those essential fatty acids.

In addition, vegetables and fermented soy have an effect on the risk of breast cancer because they have a hormonal regulatory effect.

Moreover, they usually take these raw vegetables, which bring in even more vitamins and minerals.

The Japanese also eat a large amount of algae containing traces of minerals such as selenium or iodine that improve thyroid function.

It seems that our Japanese friends can live without olive oil :-), even if they do it more and more!

How do the French keep themselves slim and healthy, even if their diet is high in fats and carbohydrates? In addition to cheese and baguettes, the French usually drink red wine with their meals, rich in resveratrol, a powerful antioxidant that is produced in plants to prevent the attack of micro-organisms.

The French also consume a lot of unsaturated fats and a large amount of carbohydrates in the form of bread and pasta, which, in combination with olive oil, reduce their glycemic index and make them healthier.

Indians season their dishes to provide not only taste, but health. Turmeric has important anti-inflammatory effects. Ginger improves digestion, reduces the amount of gas produced and “softens” the intestines. In addition, Indians relax by drinking lassi, a traditional yogurt, mint or mango drink, rich in “friendly bacteria” that improve digestion. Like the Japanese, Indians still do not need to buy olive oil! 🙂

Icelanders are easy. Fresh fish and lamb, locally produced without pesticides. Fish provides omega-3 fatty acids that improve heart and nervous health. They could be the cause of the reduction of dementia and Alzheimer’s disease. They also consume large amounts of yogurt, rich in beneficial bacteria.

It is a low fat and rich in seeds cuisine. Teff is a grain commonly used to make most dishes. It is rich in fiber, iron, protein and calcium. Seed is crucial for improving digestive health and reducing the risk of colorectal cancer.

Azifa, the famous Ethiopian salad, consists of green lentils with wholemeal bread or flatbread. Lentils are rich in vitamins and protein, but almost fat free. Also rich in phytoestrogens that contribute to the regulation of hormone levels in men and women.

The Mediterranean diet in China

The Chinese do not know about the olive oil diet. Interestingly, the use of chopsticks helps to eat less and better. By introducing less food into the mouth, digestion that starts with saliva is more effective. Separate enzymes such as amialase, begin to break down foods, especially carbohydrates, reaching the stomach in much smaller shape and improving the absorption rate at the beginning of the bowel.

We also find green tea in every Chinese house, your favorite drink. It helps to improve digestion, eliminate toxins and fight against free radicals responsible for cancer and heart disease.